Hetch Hetchy is in the northwestern part of the Yosemite National Park. Not as widely popular as Yosemite Valley or Tuolumne Meadows, it is well worth the visit-and less crowded for a good day hike.

There are several areas to hike, one of the more popular is to see the Tueeulala Falls located on the north side of the valley.

There are several hikes along this trail and the NPS goes into further detail on each one.

This was a large family trip to Yosemite. I am oldest sibling of 6, however we were missing one sister (stationed in the AF in Japan and couldn’t get away) and one brother and sister-in-law (pregnant) on this trip. My boys, my other two sisters and brother and their spouses and kids, and our mom, 19 of us total, ages 1-62,  hiked to Wapama Falls.

Once you are in the park, you will end up getting a day parking pass in addition to your Yosemite Park entrance pass. It is located off Highway 120 and it takes about 30 minutes to drive from the highway to where you will be parking. Of the five entrances to Yosemite, it is the farthest north, near the Big Oak Flat entrance station. If you are in Yosemite Valley, it is 38 miles away or an hour and 15 minutes roughly.

Wapama Falls is a moderate hike and in July of 2016, was very hot… in the 90’s. It is approximately  a 5 mile round trip hike that is relatively flat (with a few small hills) beginning at O’Shaughnessy Dam.

The trail takes you to the base of Wapama Falls, passing smaller waterfalls (if earlier in the spring). 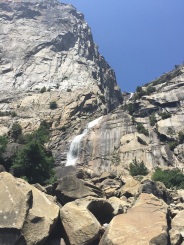 Let me note, we are a pretty active group of people on a regular basis. In the heat, this was a long, exhausting day for us all.

Your hike takes you from the parking lot, walk across the dam, and through an old train/mining tunnel. Don’t worry, you can see the light to the other side!

Walking through the mining tunnel.

Once you get through the tunnel, you walk along the north side of the valley and reservoir. The trail is pretty well-marked the entire way and is well maintained.  This part of the park closes at sunset, so make sure you start early and get back out by sunset.

The rangers will reiterate that when you get you day pass. Along the hike, you are a good distance away an up from the reservoir. The hikes gives you amazing views of all the granite peaks!

Bring plenty of water with you! Every hike I am on, there a people who are always under prepared and think they are bringing sufficient water with them. Drink 1/2 to 1 cup every 30 to 45 minutes of hiking, more in warmer weather. A five mile hike like this will take you a few hours. A 16 ounce bottle of water is not cutting it. Note: 8 ounces = 1 cup.  We had plenty of water, sports drinks, and food. Here is my youngest son though on the way back cooling down in one of the streams.

On the way back we did end up splitting up into two groups and taking two different trails, both leading back together and the one did merge back into the main trail eventually. You can see the dam, so you know which direction you need to be walking. 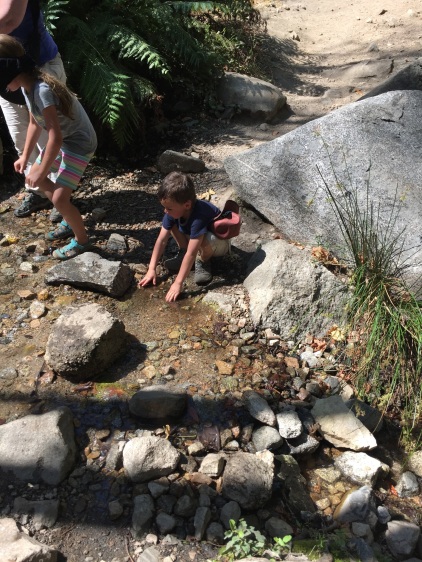 Overall, this is a fantastic day hike for families with kids. Take water and snacks and enjoy a picnic at the falls while cooling down in the pools beneath the falls. 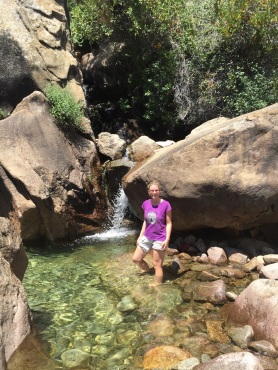 Quick history of Hetch Hetchy Valley: Native Americans (Miwok and Paiute)  lived in Hetch Hetchy Valley and surrounding areas for over 6,000 years. There is some conflict on what Hetch Hetchy means, but most commonly it is believed to be derived from the Miwok word hatchhatchie, meaning edible grasses. For various reasons and to make the story short, in the early 1900’s, San Francisco was granted water rights to Hetch Hetchy and the Tuolumne River. By 1923, the O’Shaughnessy Dam was completed and the valley was completely flooded. This project was not without controversy. That for another day.